Hi All, For the 2021 Mars Societies Million Person mars Community Design Contest (which we didn’t win, alas) me, Stellie, Dr Dan Thompkins entered our Solar Punk proposal.  I wont put the whole thing up here, but this is the first few sections.

And yet trees start from a tiny little payload, a seed. Plants pace themselves and favor growth, redundancy, and resiliency. The magic in a plant is that it uses its initial solar capturing surface area to build more solar capturing surface area. Or simply as plants emerge from a seed with one or two leaves and use sunlight to make more leaves. 97% of plant biomass is not derived from soil, but rather from the CO2 in the air and water that cycles by. We have much to learn if we wish to persist and thrive as they have. The engineering systems will emphasize biomimicry to follow the billion years of trial and error.

Photosynthesis, wind, bioremediation, and pneumatics are emphasised as primary sources of work to achieve ELP while sowbs reduce the energetic barriers to regolith processing and habitat cycling.

With these core design principles, a self-sufficient population can perpetuate with a single landing vehicle and a mass greater than 16 tonnes.

ELP: Plants to Plastic to Greenhouses

Compared to common approaches, Settling Space outpaces system level entropy challenges related to manufacturing on site photovoltaics or implementing onsite nuclear which are resource and energy intensive. Once power is provided from these systems you then need to use it to do work that requires vast amounts of infrastructure for electrical distribution, motors, controllers etc. Solarpunk aims to be as passively functional as possible and the least electrically centric.

Landing location will be adjacent to Cerberus Fossae at low latitude in pairs, both on the northern rim as this appears to be windward side as shown in image A below. Fossae average in this section less than 100 meters in width and a few kilometers long.

Images A and B Cerberus Fossae 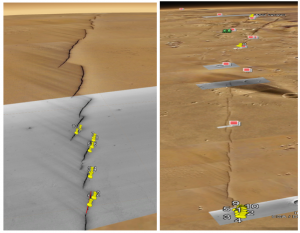 If a sudden dust event occurs, this would aid in navigation back to the starship. The 2 primary focuses upon landing will be plastic mobile waterhouse and fixed greenhouse assembly. (see Image 1,2,3). In mobile waterhouses, passive solar heating and minimum pressurization for water extraction can be expected from regolith at a rate of liters per hour. Atmospheric condensate collection on interior waterhouse surfaces. If mineralogy is in favor additional rates of water extraction could be utilized with water jets from gypsum as proposed by Paul van Susante (Breaking Rocks, Making Water: The Secret Formula for a Trip to Mars?. 2018). (https://www.mtu.edu/news/stories/2018/january/breaking-rocks-making-water-the-secret-formul a-for-a-trip-to-mars.html. )

The rate of doubling has been determined conservatively to be every 2-3 Earth years on Mars from an initial greenhouse mass/volume ( Muscatello et. al 2019). In doing so an initial greenhouse landing mass of 20% total starship payload, 20 tonnes, could initially cover 3.11 acres with a rate of doubling to cover 102,020 acres and provide food and oxygen for 1,000,000 people in less than 45 years. In this manner it would take 10 starships to bootstrap Mars to support from a basic needs standpoint a population of 1 million. This would free up massive amounts of cargo space in future passenger and luggage flights to further populate. As technological advancement on Earth will broadly outpace Mars for the first 45 years, fresh tech can frequently be brought to Mars and realized. 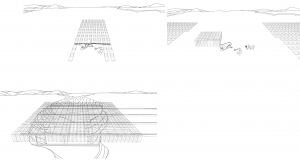 Adjustments calculation is rather simple. Here is a chart based on fleets of 10 Starships each with initial greenhouse plastic payload 20% (20,000 kg). This gets us to 100,000 acres of

greenhouse in 45 years. At roughly 1/10 acre per person for food production, this would minimally sustain 1 million people.) At 1/10th acre per person and with only 3 acres of plastic building material only 30 people amongst 10 starships would be sent. 3 person crews for each starship do not appear promising from a crew dynamic for transport and is a known constraint of solarpunk approach which hopefully can be refined. Upon landing in pairs combined crews from 2 starships will equal 6, allowing greater rotation of crew duties and crew rearrangement. Perhaps one starship would be deemed a hab while the other work and storage. As we often see in team based survival challenges camps have varying physical and social dynamics that allow adjustments.

However the goal would be to have infrastructure ready for basic resource support for 2x capacity every 3 years with no additional new payload. In this way solarpunk can scale to support 1 million in 45years. As 1⁄2 million people would be arriving at year 45, great progress in interplanetary human transportation efficiency can be realized and maximized.”

There is more, but Ive got to move onto other posts, so please get a hold of me (Colin@EcoIslandsllc.com) for the whole pdf.

CONTACT:
EXPLORE:
ABOUT:
Our team of experts employ a deep understanding of nature’s biological water remediation methods. Our solutions help our customers save time, money and space!
EcoIslands LLC. | All Rights Reserved © 2017
Contact Us

We're not around right now. But you can send us an email and we'll get back to you, asap.